GS1 UK hosted the second in its Powering Progress series of webinars, with CEO Anne Godfrey chairing a panel of industry experts on how business can harness the power of data to inform and protect consumers. 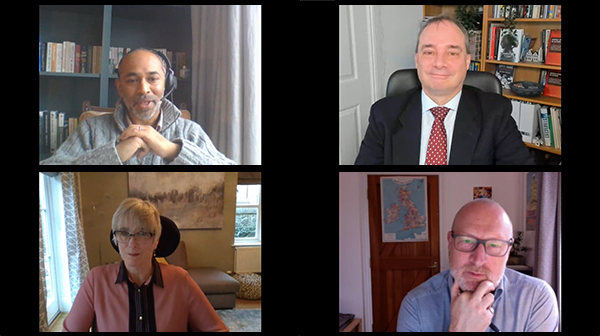 Joined by Richard Wilding OBE, professor at Cranfield University school of management, Robin Sundaram, responsible sourcing manager at Nestlé and Julian Burnett, VP global markets at IBM, the panel discussed the power of traceability and how the retail industry needs to evolve to keep up with consumer expectations.

Consumers do not really care until it goes wrong.”

Professor Wilding was keen to stress that supply-chain data was a “foundational and fundamental” part of the way that the modern business world functioned. “If we don’t have it” he said, “supply chains just do not work as well as they should.”

Underlining this further, IBM’s Julian Burnett emphasised just how important standardised data is for our consumption-based economy, saying: “Consumption is fuelled by production all over the world and our ability to track and trace product as it moves from one side of the world to the other – to us, into us or onto us – can be fundamentally served if we are able to drive levels of transparency and traceability.”

While data underpins the way that we work and trade, information on what we are buying is not front of mind for many people, nor is it being used to its ultimate potential.

“Consumers do not really care until it goes wrong” said Wilding, “you believe that if you're getting it from a legitimate source, that that particular item is safe, it's secure.” This was supported by Nestlé’s Robin Sundaram: “When you sell your products, consumers just expect – particularly from big brands – that they're doing everything right.”

On the potential for data to be doing more to ensure we are making appropriate choices from both an ethical and economic standpoint, both Sundaram and Burnett agreed that the current situation could be improved upon.

“The cost of food in this country doesn't really reflect the cost of producing that food, whether it be the environmental cost or the social cost” said Sundaram. “With COVID-19 and food poverty and the number of people going to food banks, you can't make food more expensive.

“You can say we know exactly where it's coming from. But are you actually being responsible in the way that you're bringing that product across as well?”

Burnett was candid about industry falling short in its role to maximise the use of data: “I don't believe traceability is empowering the informed or protected consumer.

“The information required to inform and protect is actually quite fundamental to doing good, efficient business, and I'd argue that every participant along those supply chains, irrespective whether they feel they have a duty or a responsibility, should take an interest in recording and sharing the information that we as consumers quite reasonably expect to be available to us.”

Businesses do need to become much more transparent about what they're doing.”

The panel agreed that transparency and a common form of data exchange were vital on a B2B2C basis.

“The two big words for me really are transparency and collaboration” said Sundaram, “Businesses do need to become much more transparent about what they're doing.”

“The trust between trading parties is the most fundamental” said Burnett. “A trusted trading relationship between your organisation and another where the information exchange can be of value to each of you, that is the challenge here.”

Cranfield’s Professor Wilding highlighted that the fast-moving nature of industry meant visibility and interoperability were paramount. “Having that layer of transparency and that continuous monitoring is totally critical” he said. “We've got to make sure that we've just got all this stuff in an electronic format and moving forward.”

However, future aspirations are far from the present reality: “We're currently probably 20 years behind even some African nations on sharing data because we've never had to do anything about it” admitted Wilding.

We need to form a coalition around these issues and understand the role that we can all play. Yes, technologies can play a part. But at the end of the day, this is about trust, collaboration, and sharing.”

The major thread that unified the panellists was the need for a collaborative approach to truly inform and protect consumers – but the advantages would have to be clearly signposted for company owners.

“The majority of businesses….upstream in the supply chain are small-to-medium enterprises” said Wilding, “The key thing really is to actually get them engaged in this and recognising how this benefits them.”

Nestlé’s Sundaram put forward the idea of administrative guidance to encourage cooperation: “There's a role for government to come in as well, because there probably isn't enough clarity around what is pre-competitive and what isn't. And I think that is stopping brands from maybe collaborating.”

Burnett summarised the current stare of play: “The motivators are there. The information is there. What we're lacking at the moment is collaboration."

”We need to form a coalition around these issues and understand the role that we can all play. Yes, technologies can play a part. But at the end of the day, this is about trust, collaboration, and sharing.”

As we look to our next webinar in the series, "EU Exit - what does the future hold for British businesses?", we would like to say a big thank you to Richard, Robin and Julian for joining us on the panel and sharing their fantastic insights on the importance of industry-wide collaboration when it comes to traceability.